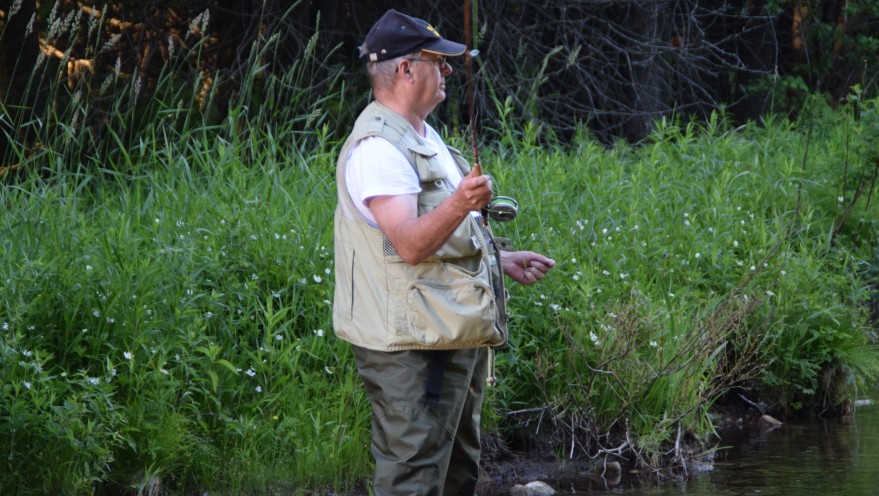 Casting Lines on the Waters of Friendship

And each year on the river, once or twice, I will meet men and women with a fire of generosity in them, of love for others that God required old prophets to have.
— David Adams Richards

In contrast to family, we choose our friends — at least according to the old adage. I don’t know whether he chose me or I chose him, but Gary Bowen and I have been friends for 44 years.

I have Gary to thank for many things. He’s been the mortar that has held together the group of our closest university buddies — Don (‘DD’) and Billy Doyle, Randy Mather and Bob ‘Herbs’ Kidd. And he reintroduced me to fishing, which evolved into fly fishing, my mature-life passion. 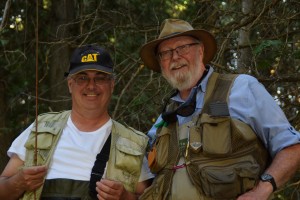 Gary (left) and me, friends for 44 years

Gary and I met in 1972 in our first undergraduate year at Trent University in Peterborough, Ontario. I was 21; he was 19. We were living in the same residence (Reade House) at the same off-campus college (Peter Robinson). Both are long gone, reduced to increasingly unreliable memory. He subsequently majored in biology, while I majored in English. We both did well in our respective subjects.

In fourth year we shared quarters with another buddy. The upper-storey apartment became the primary meeting place for all our friends. Although we had a pull-out cot for those who wanted to crash for the night, Herbs preferred sleeping in the bathtub after filling it with hot water. (I know he’s lucky he didn’t drown).

Gary, Herbs, DD, Billy and I played on the same intramural hockey team — Peter Robinson Reds. Randy was the exception, lacing up for arch-rival PR Whites. There were always healthy amounts of partying associated with Canada’s National Passion.

After practices on Friday afternoons The Boys would retire to the Empress Hotel’s Gold Rush taproom. The 20-cent draft beer ensured we would remain til closing time. We enjoyed the country & western house band, featuring a fiddler whose first name was George. His Orange Blossom Special was a toe-tapping whirl, but my standard request was for the lilting heartbreaker Tennessee Waltz. ‘Man, he was a good fiddler,’ DD recalled, ‘I miss those days but my liver doesn’t.’

On one memorable occasion after a late-winter party, teammates collectively decided to strip buck-naked and ‘streak’ a local donut shop. What can I say in our defence of such foolish ribaldry? Boys will be boys? Anyway, believe it or not, streaking was quite a popular pastime in the aftermath of the mania and mayhem of the 1960s —  at least on university campuses.

(As a footnote, when I was attending graduate school at the University of New Brunswick Billy, DD and Randy travelled non-stop from Peterborough to Fredericton in a VW Beetle for a wild and wooly few days of companionable debauchery. Fredericton was never the same — at least for me.)

I asked Gary to be best man for my second marriage in 1990 but he declined because the wedding conflicted with an annual moose hunt. I should have checked the calendar more closely. Our friendship has outlasted my best man, who sadly died much too young, not to mention the marriage which collapsed after 18 years.

Gary comes from a family of outdoorsmen. His father Rae — a quiet man with a wry sense of humour who had no time for partying — was an enthusiastic hunter and angler, a published author of outdoor stories (Rod and Gun in Canada, Fur-Fish-Game, Outdoor Canada, Ontario Out of Doors) and an amateur wildlife painter and carver. One time he raised game fish in a home aquarium in order to observe them up-close and personal. In the early 1980s I edited one of Rae’s stories which won a Toronto Star summer short-story contest. Although their dad didn’t hunt or fish with his three sons when they were young, Gary and his younger brothers John and Rob followed in his footsteps.

When I met Gary at Trent, he returned home to Belleville on weekends throughout the fall to hunt ducks and deer. One summer while we were at university he invited DD, Randy and me to an old dilapidated shack on the shore of a lake on his uncle’s property, outside of Havelock in Eastern Ontario, for a few days of fishing. We lived on Kraft Dinner (which we reverently called KD), freshly filleted bass and bottled beer chilled in the lake. Surviving black & white photos depict a quartet of grizzled young men looking like Appalachian hill-folk. 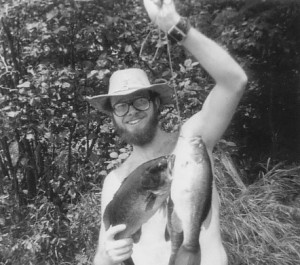 Although I fished as a kid, I caught more fish over those fews days on Lost Lake than I ever had previously — including the biggest bass caught on the trip which I claimed at the time was ‘a pubic hair under five pounds.’

When Gary and his two brothers started working, they purchased property in the vicinity of Lost Lake and built an ever-expanding hunting camp (including maple syrup hut). They now own 800 acres and have access to another 600 acres, some of which is owned by extended family. In addition to fishing for bass and muskie on the isolated lake, they hunt deer, partridge, wild turkey and bear (Rob hunts the latter with bow), as well as the occasional moose when they secure tags. Unfortunately ducks that used to populate local marshes have disappeared.

Gary and me again

I haven’t hunted since my teenage years before selling my Winchester 12-gauge pump to help pay university tuition. In contrast, almost every fall for the past four decades, DD has returned from British Columbia and Herbs has returned from Saskatchewan to join John, Rob and Gary, and sometimes Billy among other friends from various locations across Ontario, to hunt deer at the camp. In summers DD, Randy and I have occasionally joined Gary to fish on Lost Lake. On one memorable occasion I took my two sons, Dylan and Robin, and Gary took his two daughters, Liz and Margaret, for a weekend of fishing and swimming.  The hunting gatherings and fishing parties have been the glue that has adhered ’The Boys’ together over the years.

While Randy and Billy worked in insurance and I toiled as a newspaper arts reporter, DD, Herbs and Gary all had careers utilizing their biology degrees. Gary started as an environmental consultant before moving to the Ontario environmental ministry. He now works for the Toronto & Region Conservation Authority out of the picturesque Duffins Creek office north of Pickering. His expertise is water management. His career has taken him across North America, as well as to Argentina and Scotland.

For his 50th birthday Gary suggested The Boys join Herbs in Saskatchewan for a week’s fishing on Lac La Ronge. DD flew in from B.C. while Gary, his brother John and I flew in from Ontario. It was a week of angling Nirvana in pursuit of lake trout, walleye and northern pike. We stayed in a comfortable rangers’ cabin at the far end of the lake and enjoyed Herbs’ delicious shore lunches every day.

At the time I had not fished for three decades but had so much fun that, for Father’s Day that year, my ex-wife and sons got me spin-fishing gear and tackle. A couple of years later I took an evening fly fishing course at Conestoga College conducted by Ken Collins, a professional guide who operates Grand River Troutfitters. I regret not having found fly fishing earlier, but I’ve never looked back. This spring I spent a week in the Catskills with my fly fishing buddy Dan Kennaley and his brother Martin. Fishing, especially fly fishing, is a fraternity.

Gary has fly fished occasionally over many years, using his father’s hand-me-down glass rods and Pflueger Medalist reels. He gave me his father’s fly tying gear, which I treasure even though I don’t tie my own flies. I gave Gary a 6-weight graphite fly rod and sold him an Orvis Battenkill reel.

Since I took up the sport we’ve tried to get together once or twice every summer. I introduced him to such Southwestern Ontario waters as the Grand and Conestogo tailwaters, Whiteman’s Creek and Saugeen River headwaters (both Rocky and Beatty). He has reciprocated by introducing me to some trout and bass waters in Eastern Ontario, in addition to Duffins Creek.

We recently spent a day together on the Beatty. It was the second time I took Gary to the closest place to heaven on earth I can imagine. We caught and released a brace of small athletic ’bows.’ Gary also landed a brookie — Creation’s most beautiful creature. It was the first trout I had ever caught on an Adams, a traditional trout dry fly designed in 1922 by Michigan tyer Leonard Halliday at the request of his friend Charles Adams. I purchased a dozen of size 14 at the legendary Dette fly shop in Roscoe, NY — otherwise known as Trout Town USA.

As fate would have it, we met up with Dan Kennaley and I was able to introduce my two closest fly fishing buddies for the first time. Because of their mutual backgrounds, they discovered they knew some colleagues in common. We’re all fans of legendary outdoorsman/angler/writer Greg Clark — a short man who stands tall in the pantheon of Canadian anglers. I also discovered they both retrieve their fly reels ‘ass-backwards’ with the wrong hand. 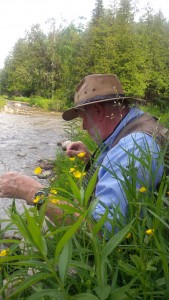 Photo of me tying on a fly taken by Gary

Forty-four years is a long time to be friends. The Boys have married, raised families, some have divorced, all have buried parents and loved ones, some enjoy the deep delights of grandchildren. All but Gary and Randy have retired. Collectively we share enough health issues to fill a medicine cabinet. One of us is heroically battling Parkinson’s. Fishing and hunting have remained ties that bind. And Gary is the improved clinch knot that keeps us from slipping.

After a glorious day on the Beatty, we began making preliminary plans for a motor tour of some of the legendary rivers of Northwestern Ontario. It would be wonderful were The Boys able to gather again. Heading down Hwy 6 to Fergus for a late supper and chilled draft Gary remarked: ‘We’ve always had a good time RR.’

‘Right on Big Guy,’ I replied. Sometimes you don’t have to fib about the size of fish you catch. The fishing itself is all the truth you need when casting lines on the waters of enduring friendship.