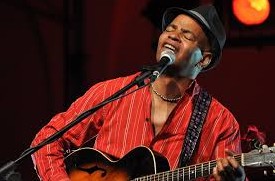 I asked for water, she gave me gasoline
— Saturday Blues performed by Guy Davis

KITCHENER — This is the first time in the TD Kitchener Blues Festival’s 15-year history that I didn’t try to cover as many acts as possible in my capacity as an arts reporter for the Waterloo Region Record.

With retirement comes a more leisurely pace. This was complicated this year by the death of my mom. Still I was able to catch a few acts on Saturday and Sunday and I would like to share my observations.

I’m going to focus most of my attention on Guy Davis. At bottom, I’m an acoustic blues guy. And I’m a big Guy Davis fan. I’ve wanted to see Davis at the annual blues bash since its inception. Davis is a sophisticated urban blues brain in a plainspoken rural blues body. While born and raised in New York City, his ancestry has roots in the Deep South.

The Renaissance bluesman (musician, songwriter, actor, director, writer) made a deep impression locally when he performed in Guelph (including Hillside) and St. Jacob’s on numerous occasions around the turn of the millennium. He finally made his bluesfest debut in style Sunday afternoon at the BIA Stage.

Slinging six- and-12-string guitars and blowing a mean harmonica, the gravelly voiced singer/songwriter did his part to revive the rural blues tradition through inspired covers and original songs steeped in old-time musical values.

He evoked his ’inner-country’ with Takin’ Just a Little Bit of Time, from his forthcoming album Kokomo Kidd. He introduced Willie Dixon’s Little Red Rooster by observing: ‘Americans are shy about barking. They shouldn’t be. There’s a pack of dogs running for office right now.’ Ouch, Mr. Trump and fellow canines!

When he introduced the title track from his forthcoming album, he noted, ‘sometimes you have to slip in a lie to tell the truth.’ He covered songs by Rev. Robert Wilkins, Sleepy John Estes (Give In Kind), Muddy Waters (My Eyes Keep Me in Trouble) and St. Louis Jimmy (Going Down Slow, ‘one of the finest blues songs ever written’). He paid homage to ‘the late great Sonny Terry’ and ‘America’s favourite black bluesman’ Bob Dylan (Lay Lady Lay).

Davis ended his set with I Wish I Hadn’t Stayed Away So Long. While not about the late Pete Seeger, he confirmed he had the great folksinging humanitarian in mind when he wrote it. He came back for an encore with Blackberry Kisses — it had nothing to do with hand-held electronic devices.

If you want to identify a specifically Canadian riff on the 12-bar blues you have to start with Donnie Walsh and The Legendary Downchild Blues Band. Anchored by lead vocalist Chuck Jackson, the Toronto-based Downchild  provided the model for Dan Aykroyd and the late John Belushi’s beloved Blues Bothers.

Whether you call it Shotgun Blues or Don’t Care If I Die blues, Downchild’s signature jump-blues rhythms have defined Canuck blues for half a century. And they showed no signs of letting up when the troupe hit the Main Stage Saturday afternoon.

Making his fourth festival appearance — and proud of it — Watermelon Slim transitioned from blues obscurity to festival fave. Sporting a thick Okie drawl, the trucker-turned-bluesman said he has played the bluesfest more than any other festival outside of his home state of Oklahoma.

Attired in a spiffy coral-coloured jump suit with straw hat, the tall, lanky bluesman regaled the packed house at the BIA Stage with slide guitar and harmonica, augmented with personable blues narratives.

Edgar Winter debuted at the bluesfest with his late brother Johnny in 2011. He returned with a crackerjack band boasting lead guitarist Doug Rappoport, bassist Koko Powell and drummer Jason Carpenter to blow the top off the Clock Tower Stage in Victoria Park.

The legendary rock/blues pioneer with the long, flowing, white locks hasn’t lost a beat in his 70 years. His Talkin’ Bout Tobacco Road was an extended essay in which he played off his patented vocal pyrotechnics against duelling guitar, bass and drums. Whether pounding away on the keyboards, Texas Tornado sax or with his synthesizer slung over his shoulder (he was the first musician to strap on a synth), Winter kept the pedal to the metal.

He revealed his sense of humour with White Man Blues. ‘I’ve often been asked, can a white man sing the blues,’ he confided. ‘If you’re as white as I am you can.’

Charlie Musselwhite was one of two American Blues Foundation Hall of Fame inductees to appear at this year’s blues bash — along with James Cotton. The Mississippi-born and Memphis, Chicago and San Francisco-honed harmonica virtuoso confirmed on the Main Stage that the blues can be graceful, classy and elegant.

One of the nicest moments at the bluesfest was when New York City’s Popa Chubby offered a blues reading of the classic Oscar-winning Over the Rainbow. Enough to make the late, great Judy Garland smile, not to mention writers Harold Arlen and E.Y. Warburg.

The artist I most regret missing is the marvellous Mavis Staples. Whenever she has performed in Kitchener, whether at the bluesfest or in concert, she has never disappointed. And I’m sure her Saturday evening Main Stage offering was no different.

The inspirational gospel diva has a poignant connection with the festival and its guiding spirit, the late Mel Brown, who made his last festival appearance opening for Staples in 2008. Brown died in March 2009, the day Staples performed at Kitchener’s Gig Theatre, where Brown was scheduled to open.