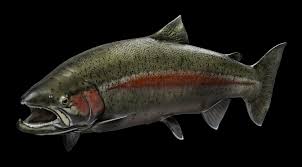 My Sorrow, when she’s here with me,
Thinks these dark days of autumn rain
Are beautiful as days can be;
She loves the bare, the withered tree;
She walks the sodden pasture lane.

Her pleasure will not let me stay.
She talks and I am fain to list:
She’s glad the birds are gone away,
She’s glad her simple worsted gray
Is silver now with clinging mist.

The desolate, deserted trees,
The faded earth, the heavy sky,
The beauties she so truly sees,
She thinks I have no eye for these,
And vexes me for reason why.

Not yesterday I learned to know
The love of bare November days
Before the coming of the snow,
But it were vain to tell her so,
And they are better for her praise.
— My November Guest by Robert Frost

. . . you always wear out life long before you have exhausted the possibilities of living.
— The Old People by William Faulkner

It’s often been said that more fly anglers spend more time casting at fewer muskellunge than any other freshwater game fish. I can say the same about steelhead.

Admittedly I get out on rivers targeting migratory rainbow trout no more than a couple of times each fall. In the decade or so I’ve been fly fishing this translates into a mere two dozen outings. Still I’ve never had so much as a nibble.

I’ve seen float fishermen catch steelhead in the same pool I’ve been dutifully casting black wooly buggers (with a little flash) or glowbug egg patterns. I’ve witnessed from close quarters my fly angling buddy Dan catching a nice steelhead. Seldom is envy more palpable. Yet I’ve never felt the thrill of a muscular silver bullet torpedoing into the current, let alone land one with its tail drooping over the rim of a net.

For me this makes steelheading the most contemplative fishing the venerable Sir Izaak could ever acknowledge. Failing to land this magnificent fish has given me lots of time to think and meditate, imagine and dream.

This coincides with my love of November’s fifty shades of grey, complete with pewter skies and slate duvet of clouds. Referred to by the Cree as ‘the month of the frosty moon,’ trees surrender their splendour to persistent drizzle as chilling gusts and intermittent flurries fall amid temperatures ‘just above the ice point,’ in the words of William Faulkner. 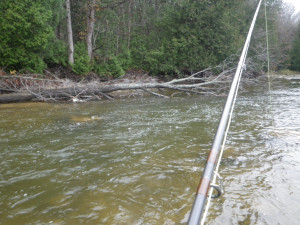 Fishy Run on the Bighead which yielded no steelhead

A recent outing on the Bighead River on the outskirts of Meaford — where the great naturalist/conservationist/writer John Muir lived for a couple of years during the American Civil War — is representative.

Dan and I hit the river together in early afternoon. We immerses ourselves in the ‘faint, cold, steady rain, the grey and constant light’ (Faulkner again). We part ways; I head downriver while he makes his way upriver. We agree to meet at my Jeep at ‘the dimming of the day’ — to use English songwriter Richard Thompson’s lovely phrase (and song title).

I usually reserve my consumption of alcoholic beverages until I’m off the water. A beer never tastes better, whether cooled among rocks in the river or enjoyed in a local pub with a hearty meal. However I would never go steelheading without a small flask of malt whisky or American bourbon in my vest pocket. In keeping with the mood of the day, I prefer an Islay single malt, perhaps Lagavulin or Bruichladdich. Maker’s Mark is my bourbon of choice, which I’m fortunate to have on this day. How lovely.

While I enjoy a cigar while casting fur and feather in all manner of weather, a Cuban Habana is never more welcome than ‘when the skies of November turn gloomy,’ in the words of Gordon Lightfoot. On this day I’m fortunate to have a Partagas Serie No 4. Again, how lovely.

My mind begins to wander as I leisurely make my way through a promising run — aren’t all runs promising? I break it down into geometric squares and cover the water as systematically and methodically as I can. I pull on my cigar in synchronicity with my casting, maintaining a satisfying rhythm that does Norman Maclean proud.

Later I sit on a large rock at water’s edge and scan the bare, withered branches of trees along the bank in search of birds I salute as companions. I take a warm swig from my flask and wait a few minutes before taking another run at the run. Time relaxes and I feel content and at peace.

It pleases me that so much of my time fly fishing is somehow connected to memory. Paradoxically, the more I focus on the living present, the pulsating Now, the more my mind ranges freely over people, places and events from the past. For me fly fishing unfolds at the intersection of past and present, promise and fulfillment, actuality and dream.

One of the attractions of fly fishing is that it encourages travel to many of the most beautiful places on this Good Earth. While I have visited the Catskills on two occasions and the Adirondacks in upstate New York once, most of my travelling is done in my head on waters no more than three hours from where I live. As such I’m a tourist casting imaginary lines on home waters.

The pull of memory and imagined travel nudges my thoughts toward reflections on the people and places embodied in talismans I carry with me that enrich and enhance my experience on the water.

The stainless steel flask is a Christmas gift from Sherry, a dear friend with whom I worked at the Waterloo Region Record during my last decade. We share the same hometown of London, Ontario and have remained close friends after my retirement, while she continues to toil at Grand magazine.

On the flask are inscribed the words: ‘One Drink Is Good, Two Is Too Many, Three Is Not Enough.’ I can’t comment on whether this is sage advise with respect to drinking, but it seems about right when it comes to fly fishing.

The Italian tan leather case in which I keep my cigars is a long-ago Christmas present from Lydia, my ex-wife of 18 years. I picked up a couple of boxes Partagas Serie No 4 on an ill-fated trip to Cuba with Lois, my former partner, and my family: sons Dylan and Robin, Dylan’s finance Emily, sister Brenda and nephew Willy. It was our first family vacation in years. I went in search of Ernest Hemingway and found instead a virulent dose of Montezuma’s revenge.

I’m comfortable in a pair of Orvis waders and a Loomis wading jacket Lois gave me for Christmas. If I ever land a steelhead, I’ll snap a photo with my compact Pentax camera, another gift from Lois. She always worried she didn’t know what to get me for Christmas but there was always fly fishing clothing, gear or tackle that fit the bill.

My Ross Reel, made in Montrose, Colorado,  was purchased with a gift certificate I received from my union in recognition of more than a quarter century of activism which included organizing, contract negotiations and processing countless grievances and arbitration awards. Finally, my 7-weight graphite rod is a Scott, also made in Montrose, which I purchased gently used as a retirement gift for myself after four decades of chasing newspaper deadlines.

I return to the Jeep a few minutes before Dan. I remove layers of fleece, wool and GoreTex as three chevrons of raucous Canada geese fly overhead. These aren’t the docile nuisances that desecrate city parks and university lawns, but true wild creatures heading south after summering in the North, following a migration pattern extending back 10 million years to the Miocene period.

A long moment after the flock vanishes out of earshot, a lone straggler who has lost his way passes with an anxious, plaintive honk on this darkening day, when the ‘essence of winter sleep is on the night,’ in the words of Robert Frost.