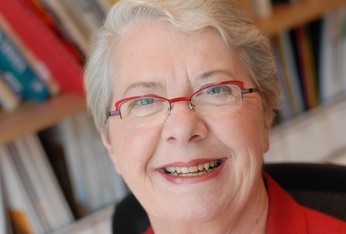 CAMBRIDGE — I’ve seldom written about food; however, I’ve had the privilege of talking to a trio of Canadian food writing giants.

Although we never met, Edna Staebler — author of Food That Really Schmecks and other monstrous best sellers — would occasionally phone me when I was an arts writer for the Waterloo Region Record.

She would call in response to an article or review she especially enjoyed. She was always generous and gracious. Our conversation would predictably slip into  topics of mutual interest such as writer W.O. Mitchell. I was taught at Trent University by Mitchell’s youngest son Orm and had interviewed the author a few times including when he gave a reading in Waterloo and when the Blyth Festival staged The Black Bonspiel of Wullie (later changed to Willie) MacCrimmon. Mitchell’s masterpiece Who Has Seen the Wind remains one of my favourite novels. Staebler knew Mitchell from their days contributing to Maclean’s magazine. Mitchell and his wife Merna often visited Staebler at her home at Sunfish Lake.

Although not a food writer in the normal sense of the term, Margaret Visser has examined the ceremonies and rites associated with food and eating with insight and eloquence. I interviewed her prior to a reading in Guelph when she was touring The Rituals of Dinner. Talking to her was a delight; however, I remember the evening of the reading with mixed feelings. The reading was wonderful, but when I got home later I found my wife at the time, decked out in my rubber boots, heroically losing a battle with a backed-up sewer that was discharging nasty water into our basement.

For the life of me, I don’t know how I missed meeting Rose Murray, the celebrated food writer who lives in Cambridge. After all, I’ve lived in Waterloo Region for three decades, about as long as she’s been a star in the galaxy of Canadian cooking.

Murray’s name came up while my partner Lois and I were dining with friends in Guelph. Mike Ridley, Chief Information Officer at the University of Guelph, not only praised one of Murray’s cookbooks, he insisted she was one of the sweetest women you could ever meet.

The temptation was too great. I emailed Murray when I got home, only to discover she had not only studied English at Trinity College, but had taken a course with Robertson Davies, the writer about whom I had written my master’s thesis. I called and we arranged a meeting within two days of my first hearing of her.

Before talking about food, I asked Murray about her recollections of Davies. She smiled before describing him in one word — “Arrogant”. Ouch.

It’s as clearly abundant as a Norman Rockwell Thanksgiving illustration that Murray has feasted on life during her 74 years — traveling, studying about food and cuisine and writing about what she has learned in 14 popular cookbooks, the mere tip of the gastronomic iceberg in terms of her publishing and broadcasting career.

Murray grew up on a prosperous, mixed farm south of Collingwood, with ‘a huge vegetable garden and lots of fruit trees.’ She adds: ‘We killed our meat and kept it in a freezer locker in town. We made our own butter and cream. We were self-sustaining.’

A powerful sense remains of a woman with her feet firmly planted in deep, rich soil. The only moment she looses patience in a wide-ranging chat is when she dismisses diet fads such as gluten-free and no-carbs. She believes a well-balanced diet supported by all the food groups is one of the keys to healthy living.

She really got her dander up when the conversation turned to The 100-Mile Diet, a best-selling book that was a Waterloo Region One Book, One Community choice in 2008. Not only was the book “poorly written,” the yuppie co-authors clearly didn’t know much about what they were preaching, including how to preserve, according to Murray who learned canning and preserving from her mother. ‘People glommed onto that horrible book as if it was something new,’ she asserted. ‘Eating fresh produce which is grown and raised locally is a very old idea.’

I’ve deliberately started this blog entry with the most contentious opinions Murray expressed during our hour-long chat as kind of a curve ball or slider. Fact is, she radiates a charm that is not only beguiling but infectious.

Although Murray left the farm to go to university, a paraphrase of the old adage applies — you can take the girl off the farm, but you can’t take the farm out of the girl. Consequently she has never forsaken her deep respect for the agricultural traditions of food.

After graduating from Trinity College at the University of Toronto, she taught high school English for a number of years before her children were born. It was as a stay-at-home mom that she once again fell under the spell of food and, encouraged by friends who were food professionals, she studied at cooking schools in Paris (Cordon Bleu, La Varenne and Ecole de Gastronomie Française Ritz-Escoffier). She also took classes in Costa Rica, Hong Kong and Thailand.

She traversed Canada, studying this country’s food culture from the inside. She ‘fished for salmon off Vancouver Island, enjoyed fall suppers in northern Saskatchewan, gathered wild rice in northern Ontario, picked berries on the Gaspé and on Cape Breton Island and dug for clams in Prince Edward Island,’ she recounts on her website. 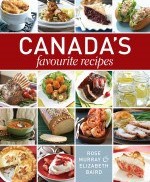 In addition to authoring 14 cookbooks since 1979, she has written for numerous magazines and newspapers including Canadian Living, Homemakers, City and Country Home President’s Choice magazine, Harrowsmith, Epicure, Ontario Living, Select Homes & Food and The Globe and Mail, with regular columns published in The Toronto Star and The Cambridge Reporter.

As if publishing books wasn’t enough, Murray was a main contributor to more than 40 other cookbooks including the popular Canadian Living series.

Owner of a cooking school in Kitchener, located in Simpson’s before it was bought by The Bay, Murray taught cuisine at Conestoga College. A sought-after speaker and lecturer, she demonstrated cooking techniques at food shows including The Royal Winter Fair, the Ottawa Food and Wine Show, Saskatchewan Food and Wine Festival and the Good Food Festival in Toronto.

As you would expect from a woman of such accomplishment, Murray has won her share of awards, both national and local, including the 1994 Bernice Adams Memorial Award in Cambridge and  2014 Waterloo Region Arts Award. She gratefully confirms she has spent much of her life ‘doing something I preferred. Life is too short not to do what you enjoy doing.’

Murray and her husband Kent, who is retired from the Ontario government, have lived in Cambridge since 1981, after returning to Collingwood and living in Owen Sound, Orillia, Kingston, London and Toronto. They continue to travel widely. New Zealand is a favourite destination.

Appropriately, Murray met Staebler at the old St. Jacobs Market. They became close friends; for years Staebler spent New Year’s with the Murrays. They attended many food and cuisine conventions together. ‘The foodies loved Edna,’ Murray remembers. Murray not only wrote the introduction to the commemorative 2007 edition of the Food That Really Schmecks, she taught a course on her friend at Wilfrid Laurier University. She recalls her friend with deep fondness, but she remains too-much the straight-shooting farm girl not to confide that Staebler continued driving her car long after it was safe to do so.

Murray still loves French cuisine — such delicacies as confit de canard au foie gras — and is enamoured with the complex flavours of Asian cooking. When asked to identify her favourite meal, she hesitates, then replies: ‘What we had for supper last night — plain roast chicken, with mashed potatoes and rutabaga and peas out of the shell.’ Did I already mention something about not taking the farm out of the girl? Forget what Thomas Wolfe said about not going home again. Despite her years of circumnavigating the globe, Rose Murray has never really left home — something for which all of us who love food are abidingly grateful.